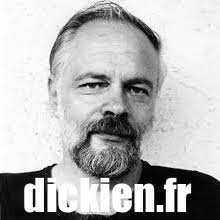 Question : How did you discover P. K. Dick?

While I was in graduate school in Chicago, I stumbled on Three Stigmata in its first paperback edition.

Question : What are you doing for a living?

Writer/producer. About to direct my first film, Nothing More than Murder, based on Jim Thompson's novel (author of books that were the basis for Serie Noire, Coup de Torchon, The Grifters and The Getaway (the 1994 version with Alec Baldwin and Kim Bassinger, which I produced.)

Question : When does it start?

The film version of Nothing More than Murder is scheduled to start principal photography in Louisiana in November. It's based on the novel by Jim Thompson, author of The Grifters, The Getaway and Pop.1280, which was the basis for Tavernier's Coup de Torchon. The film will star Jason Patric (After Dark, My Sweet another Thompson adaptation and Your Friends and Neighbors, "The Lost Boys, Geronimo and Sleepers.

Question : What is your favourite PKD's movie adaptation? And why?

I guess my favorite would still have to be Blade Runner, especially the recently restored "directors" cut without the Raymond Chandler-ish narration. It's visually beautiful, imaginative, well-cast for the most part (unlike Total Recall which is undermined by the casting of Arnold Schwartzennegger in what is supposed to be an "everyman" role). My only quibble with Blade Runner is that it's so humorless, unlike the often hilarious Do Androids Dream of Electric Sheep? upon which it's based.

Question : What do you think of Hollywood's interest in Dick (the
Spielberg/Cruise project; the Total Recall TV show and so on)?

Mainstream Hollywood always is willing to latch onto a good story idea. PKD came up with one great concept after another. Whether character, texture. nuance, humor and subtlety survive the adaptation is another matter. Expect to see a lot more PKD movies if Minority Report is successful — whatever it's ultimate resemblence to the short story source material.

Question : The Spielberg movie seems to be postponed. It seems that there were some "script problems". Why are PKD's adaptation so difficult to do?

The themes that fascinated PKD — what is real, what is human, and how can you be sure of anything — are the very issues that Hollywood has managed to successfully avoid for decades.

Question : Can you tell us the birth of the VALIS project?

For at least two years, we hounded the agent for the estate, Russell Galen about rights to Valis, Radio Free Albemuth and Flow My Tears, the Policeman Said. The estate was somewhat at odds with itself with all the various interests of wives and children unwilling to agree upon plans to exploit the rights. My partner in the PKD projects is producer Dale Rosenbloom, who recently also wrote and directed Shiloh and wrote and produced Shiloh 2. HIs other credits include Across the Tracks, which was Brad Pitt's first major role.

Question : Did your trip to the Cannes Film Festival help you?

Trips to Cannes are always helpful. But never in the way I anticipate or for the reasons I came. Cannes is the most incredible block party in the Western Hemisphere. At one point or another, everyone in the film business you'll ever want to meet is there.

Question : A naive question: why this book? It is one of the most intellectual book ever written by a SF writer...

Radio Free Albemuth/VALIS strike me as an intellectual detective story with metaphysical implications. God (or Aliens) speak to you. How do you know it's real? How do you know you're not crazy? What do you do? I love the way PKD explored these dilemmas and Ultimately what's great about these novels isn't the science fiction or philosophical storylines, it's the the humanity of his characters trapped in an insane world, trying to cope, and even trying to make a difference, no matter how small. Camus would have understood PKD as a kindred spirit. All of his stories are variations on the Myth of Sysiphus.

Question : You bought the rights for Flow My Tears...: what did you do with it? Is there a script?

I adapted the script. It was optioned by Paramount for Tom Cruise. I did a rewrite for Oliver Stone, who was attached to direct. After many months and a lot of money spent, the project did not come together and we are in the process of finding another director and another star.

Question : How do you intend to adapt the character of FFF? (i.e. are you going to keep the link with Nixon?

Although this might change, at present our script turns the nefarious Ferris Fremont explicitly into Richard Nixon — of course, it's an alternate universe still — one in which Nixon burned the Watergate tapes and managed to get the constitution changed to permit several more re-elections. America is now exactly the way Nixon might have liked it — dissent free.

Question : Do you think you're going to do a political movie or a philisophical one?

In some ways, the script is somewhat more political than the book, simple because it's now Nixon rather than a Nixonian president, but the emphasis for me is much more on the metaphysical. What happens when God starts to speak to you and you find out that the Second Coming is really an alien invasion?

Question : What will be the settings of the movie?

Our plan is to shoot in California. Part in Berkeley, part in southern california.

Question : Do you want to keep a link with Philip Dick's biography (as seen in the book)?

The link to the real PKD is unavoidable. Radio Free Albemuth, upon which our project called VALIS, is primarily based (as opposed to the novel VALIS, which we see as utilizing as a possible sequel to the first film, i.e. VALIS 2) is a thinly disguised account of Phil's own struggles to come to terms with this experience of divine intervention. He's one of the main characters. We've heightened this element somewhat.

Question : How to you intend to keep the communist references?

Since the story takes place in an alternate reality that's probably about 1984 or 1985 by our reckoning, the Soviet Union is still intact. As in the book, the President is a sleeper communist agent.

Question : The book has two differents narrators. Which point of view will you keep?

The story mostly follows Nick. Sometimes Phil. Movie point of view can be divided even more easily than literature.

Question : Did you have any "echoes" about your project from PKD's fans?

Just a few. Mostly well wishers and those expressing the hope that we'll successfully capture the spirit of the book.

Question : How 's the casting going ?

For the moment, we are focusing on raising the financing first, then casting. Any wealthy PKD fans out there in France who'd like to help fund the movie?
This interview was conducted back in 1999, by mails for the now defunct French magazine Slash.

Back then John was kind enough to let us publish the first pages of his script.

They are withdrawn here as Radio Free Albemuth was filmed in the fall of 2007 and is currently in post-production.

So let's go back in time, before Minority Report, as John was coming back from the Cannes Film Festival.

My script that we actually used for production of Radio Free Albemuth changed slightly over the intervening years, interestingly in the areas that this 1999 interview touches upon. In the new RFA script/movie, the fall of Communism has already taken place. Ferris F. Fremont is now Richard F. Fremont — a kind of splitting the difference between Nixon and Fremont. Also, of course, the whole concept of a shadowy terrorist organization that may or may not really exist is much more timely. But while the political aspects are front and center, I think the metaphysical/religious aspects of the book are even more evident now. All versions of the project track the book in that the concept of VALIS as an "alien invasion" is clearly a benign force, except, of course, to the tyranny of the Fremont regime.